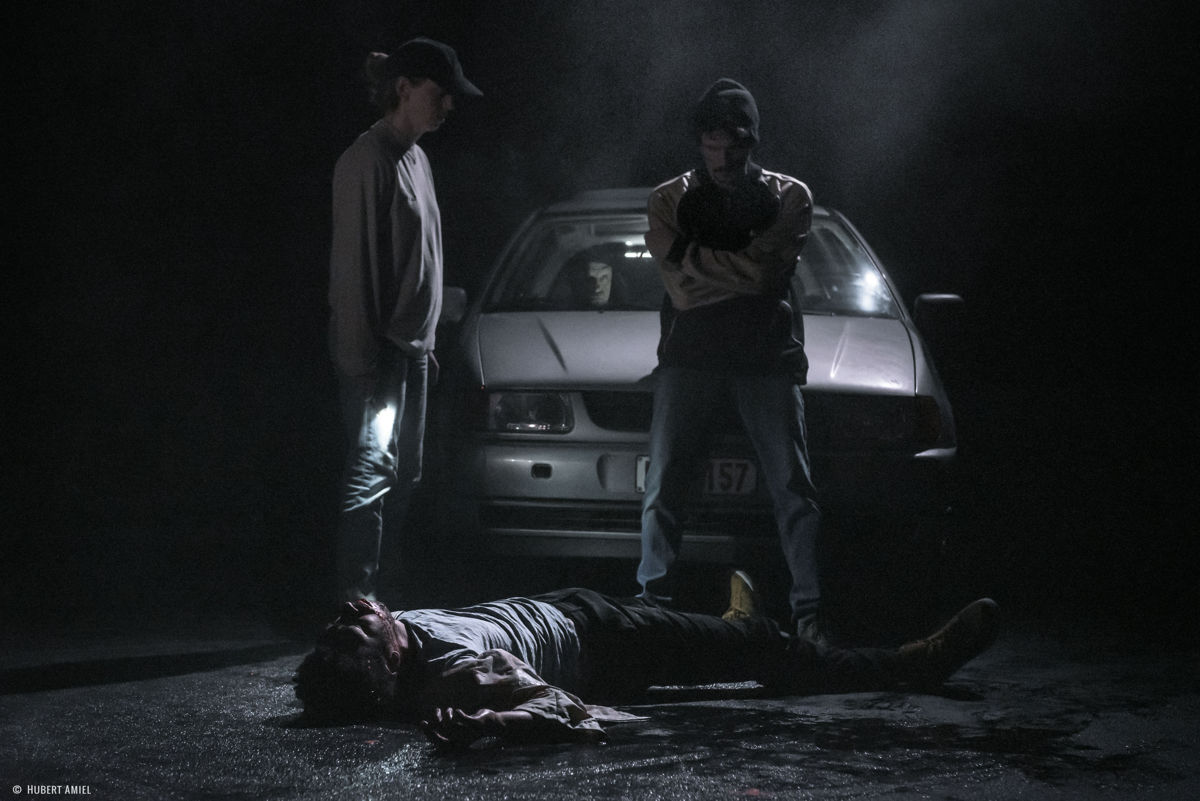 Between re-enactment and appropriation: the as-if strategy of Milo Rau

Acclaimed director Milo Rau knows like no other how to deal with collective traumas. In La Reprise, however, he overplays his hand as he tries to combine the violent murder of Ihsane Jarfi with a meta-theatrical reflection about reality on stage.

When does theatre begin? Johan Leysen at once asks the key question of his beloved trade in the wonderful opening monologue of La Reprise: Histoire(s) de Théâtre. When the éminence grise discusses the issue of taking to the stage, the status of the actor (‘an actor is like a pizza deliverer, it’s about the pizza, not the deliverer’) and when, in the role of the ghost of Hamlet’s father, he pays tribute to the theatre as a place where the dead can come to life, he not only introduces his own extensive stage history, but also that of Western theatre.

In doing so Leysen gets straight to the age-old heart and mystery of the art of theatre. When do the words of an actor become ‘real’ for an audience? What does ‘reality’ mean on stage and how does it always already get negotiated, built up or reduced by the fictive frameworks of the theatre? When Leysen’s eyes subsequently water during a moving passage – the timing is perfect – he becomes the embodiment of Diderot’s paradox, which posits that the most believable actor is not susceptible to the emotions that he himself performs. Later, when he is joined by some amateurs, it will call up even more questions about the profession of acting.

It is an ambitious point of attack for the first show in Milo Rau’s new series about the history of the theatre, with a nod to Godard, entitled Histoire(s) de Théâtre. But even though La Reprise is again proof of Rau’s rather brilliant directing genius, it does not reach the level of earlier work in terms of substance and you’re left with a lot of scattered jigsaw pieces. This has to do in part with the story of Ihsane Jarfi, the young gay man who was murdered in Liège in 2012. He serves as a stepping stone for Rau’s meta-theatrical research. The director uses the ingredients of the classic tragedy – five acts, the inevitability of the fate that awaits the individual – to re-enact the murder according to the laws (and limits) of the performing art.

Why the Jarfi affair is precisely the ideal case for this is never made entirely clear, however. We know that Rau likes to seek out controversy (just think of Five Easy Pieces about the Dutroux affair and his recent adaptation of the 120 Days of Sodom), but no matter how sad this case may be, it is a news item that does not fit easily in a broader narrative. How do you turn a senseless murder into a senseful play?

Yet Rau’s fondness for what Frederik Le Roy has called ‘allegorical doublings’ has led in the past to fascinating theatre. Since his Europe trilogy already, the director has used the personal life stories of his actors and characters to say something about larger historical and ideological shifts. The personal is therefore always used politically in Rau’s work. But while that system produced layered parables in The Civil Wars (2014) and The Dark Ages (2015) about the post-ideological state of Europe or the failure of European identity, in later shows the process has begun to show more and more holes. Rau no longer manages to fit the micro-stories of his protagonists in a balanced meaning in which small human actions are placed in a broader, meaningful framework.

This became apparent notably with Five Easy Pieces (2016) already, in which Ray wanted to present Dutroux as a figure whose course of life combined the history of Belgium and the ‘decline of Western colonial and industrial powers’. The play opened with a re-enactment of the independence speech of Lumumba, a link that Rau justified on biographical grounds because Dutroux had lived as a child for some time in the Congo. The reference to the colonial legacy as the basis of Belgian identity and cultural memory remained a loose thread, however. Fortunately Rau soon turned the focus to the system of the theatre itself and zoomed in on the power dynamics between director and (child) actor. This generated a complex narrative about growing up in the post-Dutroux age. Reality, fiction and metafiction intermingled in a hair-raising manner.

In La Reprise you mainly see the gaps between those registers. The Jarfi case serves Rau especially as an illustration, as a tool in his research into the status of theatre. He uses Jarfi’s murder to thematize, for instance, how death is the only thing that an actor cannot perform, but perhaps that is precisely why so many ghosts pop up in the history of theatre. Or how theatre in its essence is political, precisely because it exists by the grace of the resurrection and the possibility of always beginning over, as poetess Szymborska says through Sara de Bosschere. These are wonderful thoughts for a theatre lover, but they find little ground in the theatre that you see before you.

In the same way, the ghost of Jarfi wanders around restlessly on stage, asking himself why he was woken from the dead. ‘Let me, let me freeze again to death’, Tom Adjibi later sings, not by coincidence, being Jarfi’s theatrical but also almost factual doppelgänger. Rau pretends as if the show is about the Jarfi case by subjecting it to a Brechtian sociological analysis, but this is only developed superficially and appears rather far-fetched within this meta-theatrical context. Through warehouseman Fabian Leenders, one of the Liège amateurs who Rau selected during a local audition, he zooms in on the social circumstances which possibly led the perpetrators to carry out their act. But Rau does not get beyond the high level of unemployment which Liège has had to deal with since the collapse of the steel industry. Neither does the story that de Bosschere relates about the metalworker who saw his industry go under – combined à la Rau with the union demonstrations which her mother took her to from a young age – go into much depth.

That Rau appropriates the horror of other people to perform a meta-play is not in the least problematic. Theatre has the essential freedom to re-enact anything – la reprise, quoi. But then it has to yield something. Choosing the Jarfi case seems almost gratuitous, as though any story about violence could have been used to make this play. What in fact does Rau want to say here about the re-enactment of violence on stage? How is the effect of the reconstruction of Jarfi’s calvary, which Rau tragically works towards, woven into the show? And why was it so important to play out this event so meticulously and to bring it back to life?

It is striking how Rau’s theatre, more than in the past, seems to want to relate to the legacy of realism. You can see it in the hyper-presence of sleek film images in which the theatrical construction is no longer visible and which therefore hardly conjure any tension with what can be seen live, as a result of which this show, strangely enough, is closer to cinema than to theatre. But you also see it in the many banal scenes (such as the awkward imitation of the party at which Jarfi disappeared), in the use of amateurs, and in the (image of) transgression which they, skilfully accompanied by their professional counterparts, seek out by, for instance, performing naked. What critical angle Rau sees in that realism remains unclear.

Rather, the play lives off a slightly perverse and ambiguous reality effect. Just as Rau always insisted on working with the life stories of his actors, he now consciously sets to work also with ‘real’ people, ‘real’ Liégeois in this case, a line that he is going to keep on drawing as artistic director of NTGent. Again this appears to a certain extent like a strategy of make-believe, because these people are not being mobilized as ‘themselves’. Leenders can act the DJ and play Autechre and Aphex Twin, but the way in which Rau at the end has him ride around in his fork-lift truck as an attraction brands him as a mere representative of his social class. It makes the remark of one of Jarfi’s murderers, who confided to Leenders in prison that he should be grateful for the chance he was getting with Milo Rau, and the whole meta-reflection about role playing rather problematic.

The same holds for Tom Adjibi, furthermore the best actor that we have seen in recent times on stage. During one of the first scenes, he says that as an actor he is always cast for his background, not for a character. By having him say this, Rau is criticizing this ‘Dardenne casting’. Except, he is doing the exact same thing. No matter how meta Rau likes his theatre, he doesn’t question his own position.

Last but not least, why is it so important that the case that Rau uses here truly happened, when you think that he employs it in a dramaturgy that neither really listens to, nor seems to be affected by that true story? It reveals an almost fetishistic urge for truth which can only light up via that singular connection with reality. Although today we are perhaps ardently looking for the truth – how do we catch sight of meaning in this tragic, senseless chain of events? – and although it may be one of the main appeals of Rau’s work, that striving is not unproblematic. Especially if you don’t thematize it. Contrary to the tradition of the historically modern allegorists, Rau does not sufficiently show the fragments from which new meanings are formed and he therefore fails to hold up his own method to the light.

Just as Jarfi’s ghost does not have any agency in this show, you wonder what spectator Rau has in mind in a closed dramaturgic system such as his and what world view lurks behind a show that uses political and social determinism as its artistic method. The sixth act – the epilogue in which the director invites the audience to break through the chain of fatality by having Adjibi perform before our eyes the only unrepeatable act on stage – unfortunately remains too theatrical and only briefly destabilizes the system to emancipate passive viewing.

This does not alter the fact that Milo Rau is one of the few theatre-makers whose shows linger in your mind for days after the premiere. If there is anyone who has put theatre back at the heart of the public debate, then it’s him. For that reason, although this text presents a critical perception, it is rooted in great admiration. Besides, in La Reprise you can see the outlines of a new kind of public theatre for vast audiences take shape which is not afraid of complexity. That is extremely rare. It makes you hope all the more that international success and the sustained production rhythm of Rau’s work will discourage any future formatting.

With thanks to Ciska Hoet.