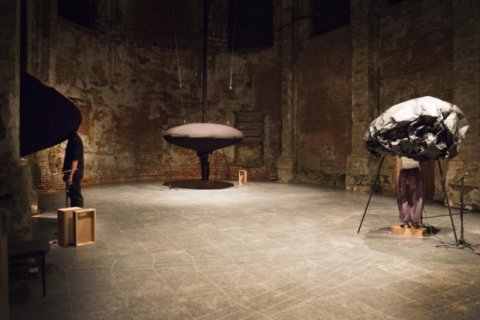 My self as many

In Begüm Erciyas’ Voicing Pieces my voice initiates and becomes part of a complex theatrical apparatus, staged for one person: myself. My voice causes sheets of text to move, lights to fade in and out and change their direction. This theater enables me, visitor and performer all at once, to experience and encounter myself as a multiplicity, a ‘we’; the boundaries between the speaker, her voice and the ‘voice’ of the text subtly disappearing.

Upon entering the Brigittines chapel, I see three mushroom-like structures, with big black heads and thin metallic feet, lingering in the dimly lit space. These are the reading stations, one-person theaters, waiting to be inhabited. One is in use when I enter, and I notice the humor inherent in their architecture: as the upper part of the visitor’s body disappears in the black ‘head’, it looks as if the mushroom has human feet.

I hear voices already: the voice of the woman ahead of me, reading out loudly to herself inside the mushroom, the echo of her voice bouncing off the walls and ceiling of the chapel, and the voice of the hostess of the performance, explaining to me the instructions of the piece. I am to enter into the mushroom, put on a headset, and read aloud the entire text that I will have found.

I enter the first station and put on the headset as instructed. I look around for a moment, eager to discover the inside of the mushroom. It’s a pleasing, comfortable space. Its hard black, matt aluminum material seems to flow and fold as if it was poured from the ceiling. On a music stand lies a large white book, already opened on the first page. The book seems ghostlike, lit by a small spotlight behind my head. I begin to read: “One. Two. One. Two. Three. Soundcheck.”[1] The standard phrase for testing the musical equipment before a performance marks here the beginning of the piece. It sounds like a poem in which my voice, amplified, introduces itself to me. I listen to its volume, frequency, timbre. Already in this soundcheck, I am gently and playfully introduced to the experience of encountering ‘the other’ within me, simply by listening to my amplified voice returning to me through the headphones. However, it quickly becomes clear that I am not the only one listening. The soundcheck is not only for myself but also for the sound technician(s), who, from now on, speechless, listen(s) to and manipulate(s) my voice according to where I find myself in the text.

As I turn the pages, the text reveals itself to be a score. As I pronounce ‘it’, it speaks back to me, it instructs me, indicating how it wants to be read, by its content and materiality, and by the size and color of the font. Subsequently, the technician playfully intensifies this initial experience of intimate estrangement that the soundcheck produces by a number of simple electronic effects that mechanically change my voice(s) and hence my subjectivity(/ies). A change in frequency jokingly suggests a change of gender, a delay (the effect of an echo) transports me to a different space, I find myself screaming, then whispering, then playing with the rhythm of my breath. In the second station, I encounter my voice as if completely disembodied, listening to it as if I was listening to random fragments of voices of passers-by on the street. In the third, my voice lags behind me as if I was drunk, or engulfs me in its rhythmical musicality, my speech becoming a waterfall washing over me.

In Begüm Erciyas’ Voicing Pieces my voice therefore initiates and becomes part of a complex theatrical apparatus, staged for one person: myself. My voice causes sheets of text to move, lights to fade in and out and change their direction. This theater enables me, visitor and performer all at once, to experience and encounter myself as a multiplicity, a ‘we’; the boundaries between the speaker, her voice and the ‘voice’ of the text subtly disappearing. However, this experience is only possible with the help of a person/persons behind the scenes, the technician(s) listening. Voicing Pieces is built around a certain promise of privacy which it can never fulfill: the reader discovers the strangeness of her own voice in the privacy of one of the mushroom-stations . The very condition for the piece to work, is that I am never alone. The ‘we’ that is made up of the visitor, her voice and the text, therefore extends to include inaudible others in one’s service, making the experience possible. This feeling of being watched and/or listened to, of leaving traces unknowingly, is somehow too familiar to be ignored. In one’s everyday life on the city streets, while using the internet or a phone, the promise of privacy that is never quite kept, in order to enable the ‘experience’ of security or of consumption, is omnipresent. This uneasiness regarding the silent listener(s) is the side-effect of the electronic treatment of the voice reading, which allows for the voice to literally escape from the mushroom and subsequently from one’s own private sphere, in combination with the fact that the technician(s) are never addressed as co-performers of the piece. Instead of the private experience that it stages, Voicing Pieces is much more a collaboration between myself, my voice(s) and the technician(s).

After a certain point, and with all these voices and thoughts in my head, I start feeling somewhat uneasy about performing the initial contract to read the entire text. When reading a book I can enjoy the trip: being taken to places, of just following someone else’s thoughts, taking my time, starting and stopping at will, returning to previous pages or read ahead as I please. But here the text addresses me constantly, mostly giving me tasks instead of luring me to travel. Therefore I am unsure of the liberty that is allowed to me. I sense that the decision to stop reading or to skip parts would be almost an act of refusal of the theater that is being offered to me. Therefore I continue, trying to fulfill my role the best I can. Finally, I admit a certain relief when I reach the bottom of the last page of the third reading station. I read, self-consciously as always, ‘I am ending this piece now’. ‘Now’, I repeat emphatically. The lights go off, the text disappears. I crawl out of the mushroom head, take off the headset and am alone again.

Voicing implies an urgency; it is in this urgency that its political potential lies.&nbsp;Here, however, in this setup, by becoming a contract and a task, and by being so dependent on technical enhancement, voicing risks to be reduced to a theatrical effect rather than becoming a critical gesture.

[1] All quotes from the text are from memory and can therefore be slightly inaccurate.&nbsp;

Marialena Marouda is a performance artist and researcher. After studying philosophy and visual arts at Columbia University in N.Y., she completed her MA in Applied Theater Studies at the University of Giessen, in Germany. She is currently an artist-researcher at a.pass in Brussels. For more information: www.poetryexercises.de