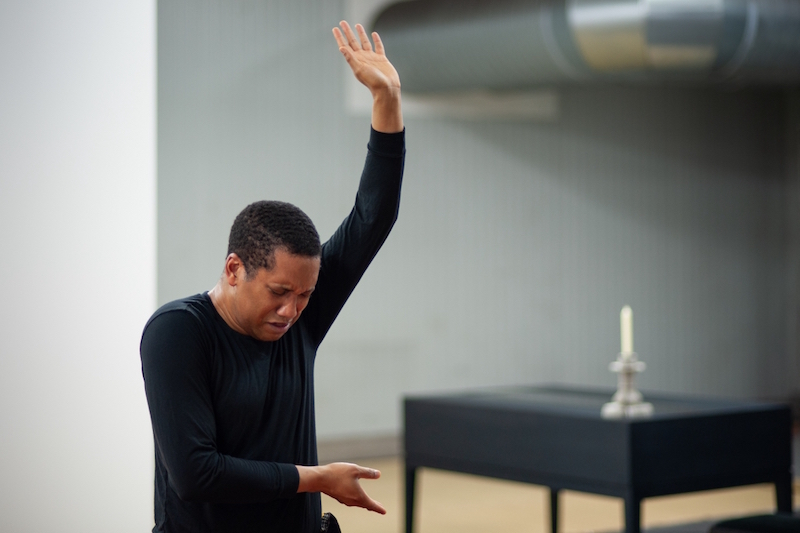 Performing the performing other

American dancer and choreographer Trajal Harrel marks his first appearance at Brussels’s renowned Kunstenfestivaldesarts (KFDA) with a show which borders performing arts and visual art. Made up of two parts: Dancer of the Year and Dancer of the Year Shop—the former, a dance performance, the latter, an installation-performance—the show’s interdisciplinary nature resonates with the recent 2019 edition of Performatik, the Brussels biennale for ‘live art’, which has just ended.

The choice of venue is indicative of its interdisciplinary trajectory. Instead of taking place at a space particularly dedicated to performing arts such as the Kaaitheatre or KVS, it takes place at KANAL, the Brussels’ branch of Centre Pompidou, an initially collection-based visual art institution which has expanded its museological activity into a space ‘devoted to artistic creation in all its forms’ 1 including performing and performance art.

Apart from reflecting on the disciplinary and institutional boundaries, the fact that Harrell’s work is timely framed to take place in the context of the Belgian Pride Brussels 2019, when LGBTQ rainbow flags are ubiquitously visible across Brussels, also highlights the show’s engagement with identity politics. I will use these frames to discuss the artist’s work at KFDA.

As I make my way to what I assume would be a black box in an enclosed space, as customarily the case for solo performances I have experienced at KFDA, I am struck by the fragility and porosity of Harrell’s ‘stage’. The performing space is completely exposed to the rest of the gigantic industrial hall of the retired -Citröen garage. The ‘podium’ is only a few-millimetre high and made of a thin layer of tatami mats topped with a thin rectangular red carpet. This is where the act of dancing, which principally informs Dancer of the Year, will then take place. Flanking this performing space are a shelve and a vitrine on the right and two other vitrines on the left; an isolated thin white partition at the back functions as the backdrop of this tenuous ‘stage’. These props mark the sketchy boundary of the performance space where the dance performance Dancer of the Year and the installation-performance Dancer of the Year Shop merge. The dance performance takes place first; then, after one hour of ‘intermission’, follows the installation-performance where the artist performs as a shop manager and the audience curious customers whom are asked which objects on the shelves and in the vitrines they want to see.

Harrell cleverly makes use of a recent personal circumstance where he was named, in 2018, ‘Dancer of the Year’ by Tanz magazine as an opportunity to reflect on his dance and (the making of) his being a dancer. Doing so, he turned a usually unquestioned space of spectacle into a critical art installation and astutely framed the dance we will then see unfolding on the ever-precarious ‘stage’ as an act of performativity.

Dancer of the Year

Unlike Twenty Looks or Paris is Burning at the Judson Church—which pits the New York voguing scene and runway culture at the Harlem Ballrooms against the institutionalised American minimalist postmodern dance form, the choreography of Dancer of the Year comes through, as aptly described by Sarah Jansen in her brilliant essay, as ‘a very dense fabric that is impossible to unravel in a linear narrative’.2 This highly entangled singularity which draws on an eclectic mix and ‘does not sit nicely in categories but produces something bordering historical fictions and cultural multiplicities’,3 however, for me, come through more as a choreography which invoke, rather than resist or denaturalise, the imaginaries pertaining to Orientalism. This includes the twirling of ‘his’, which in that performative moment has become ‘her’, arms up in the air which calls forth an association with something bordering the Japanese and Arab imaginaries; a particular angulation of the feet and knees whose line and bouncy, yet controlled, movement hypnotises you and is highly reminiscent of the Indian or Cambodian dance vocabulary or even the African ‘lingering’ pose. In line with the butoh aesthetic trajectory against Western styles of ballet and modern dance and noh’s neutrality of expression, Harrell’s choreography is saturated with raw emotions through grimaces—soaked with either sweats or tears, or both—and ambiguous facial expressions alternating between delights and doubts, taking us from one embodiment of character to another. For me, these bodily and facial configurations all come together to produce the figure of the ‘other’—the spectacle of exoticism.

Uncannily echoing the same debate surrounding the political activity of LGBTQ parading in which the show is, intentionally or not, framed, Dancer of the Year similarly invites discussion about whether or not a choreography and dance performance which embodies what Jansen calls ‘other bodies, identities and voices’4 is an activity enhancing the visibility of those in the periphery or, rather, a spectacle of exoticism which reproduces and reconfirms itself as the ‘other’ and feeds on the white male heterosexual subjectivity whose discourse and gaze dictates how we think, communicate and see. This dilemmic position faced by Dancer of the Year and practices in identity politics carry more weight when taking into account the controversy around the butoh pioneering member Kazuo Ohno’s ambiguous sexuality and his cross-dressing practice whose dance legacy rigorously inspires Harrell’s choreography in this work.

It is undeniable that, in Dancer of the Year, Harrell does mobilise disruptors of the theatre’s suspension of disbelief. These include the grotesque head mask and the big luggage containing different sets of clothing he carries into the performing space upon his entry—all of which posits ‘identity’, not as something innate and permanent, but as provisional acquisitions. But for me, these ‘disruptors’, for some reason, are not sufficiently integral to the choreography itself. And if they do, they, rather than disrupting, further reiterate the production of the bodies and identities of the others. A long bouncy skirt which looks like something a flamenco dancer would wear and a translucent pleated skirt with accessories indexing some non-European, most probably Arab, cultures and identities, for instance, complement the dance acts to, at its best, conjure up the figure of the harlot oozed with contagious uncontained sexual desire—an excess the Enlightenment discourse condemns as inferior.

Compared to Twenty Looks, Dancer of the Year is, therefore, more ambiguous in its critical potentiality due to a lack of internal mechanism of disruption in the dance itself. These disruptors would have questioned, exposed or denaturalised categorisation of identities dictated by discourses pertaining to Eurocentrism and heteronormativism. This lack of any effective distancing effect inherent in the dance choreography itself, I feel, also affects the artist’s claim to archive dance critically, especially on the question of how and how much non-European forms inform European modernist and postmodernist practices.

Dancer of the Year Shop

The ambiguous critical status of Dancer of the Year is, however, shored up by the performative framing of the whole show anchored in the latter part: Dancer of the Year Shop. An installation-performance in form of a ‘shop’ where Harrell himself takes charge of selling his personal belongings, this second act forces us to evaluate the dance we have earlier seen in the first part of the show in an alarmingly materialistic way. That is, it forces us to look back at the dance and ask from which of these tangible personal objects the previous dance acts has derived. In a space where a fine line between reality and fiction constantly operates, the artist asks each audience-member-now-turned-part-of-the-show which item he or she wishes to see and, provided that the person offers a good price and promises to take good care of the item, buy. It feels fun when my turn arrives to pose an interest in what I want to see and perform as a customer who wants to acquire some of these personal, at times very personal, items. Fuelled by sentimentality, I ask to see the artist’s framed love letter; his mother’s wigs and a sepia photograph of his father proudly posing in his best suit together with his two other fellow students at Morehouse College then, in 1955, the place for higher education African Americans in Georgia were allowed to be and pursue their controlled academic ambitions. These personal objects not only charts but quantifies the course of Harrell’s formative years as a dancer who he has become. The unapologetically romantic love letter by Howard, then in 1990, his lover, speaks of the love and support the artist received making his way to become a professional dancer: ‘Take your body with you and give it what it needs, what it wants….I’ll be there with you and you with me.’ His father’s photograph at Morehouse clearly speaks of the racial segregation in the 1950s of the Southern United States which he says, although things are different now, ‘it is important to account for this history within my own legacy’.5 This is an area of the show where his claim to critically archive his dance comes through more effectively, especially when the tension between the sentimentality of these objects and their financialisation is unmistakable.

With direct reference to Tatsumi Hijikata who sent his butoh dancers to perform and make money for his company,6 Dancer of the Year Shop begs a consideration about the complicated relationship between art and economy; production, valorisation and critical agency of art; as well as the boundary between art and life. This reference to practices informing Harrell’s current show also enables a perception of the bodily movements of the shop’s manager and audience-turned-customers as a sort of choreography—a perception which would then effectively turn the stage into a site for archiving dance performatively. By craftily mobilising the popular interdisciplinary practice which merges performing arts in Dancer of the Year and performance as a contemporary art practice in Dancer of the Year Shop  together, considering the two parts as a whole brings to attention and calls into question the re-institutionalization of performance art practices whereby institutions have expanded their object-based museological practice to incorporate such ephemeral artforms as performance and performing arts. Critical voices have advocated that this change of direction in institutional collecting practice has turned audiences into customers and their experience of the performance a mode of consumption in post-Fordist society. And for that, Harrell succeeds to make it dawn on us upon our experience of the latter part of his show.

1https://kanal.brussels/en/kanal-centre-pompidou/kanal-centre-pompidou-1 (my emphasis)2Sara Jansen, ‘On Trajal Harrell’s Dancer of the Year and Dancer of the Year Shop’, https://www.kfda.be/assets/77983Interview with the artist, May 2019.4Jansen.5Interview with the artist, May 2019.6https://www.kfda.be/en/program/dancer-of-the-year