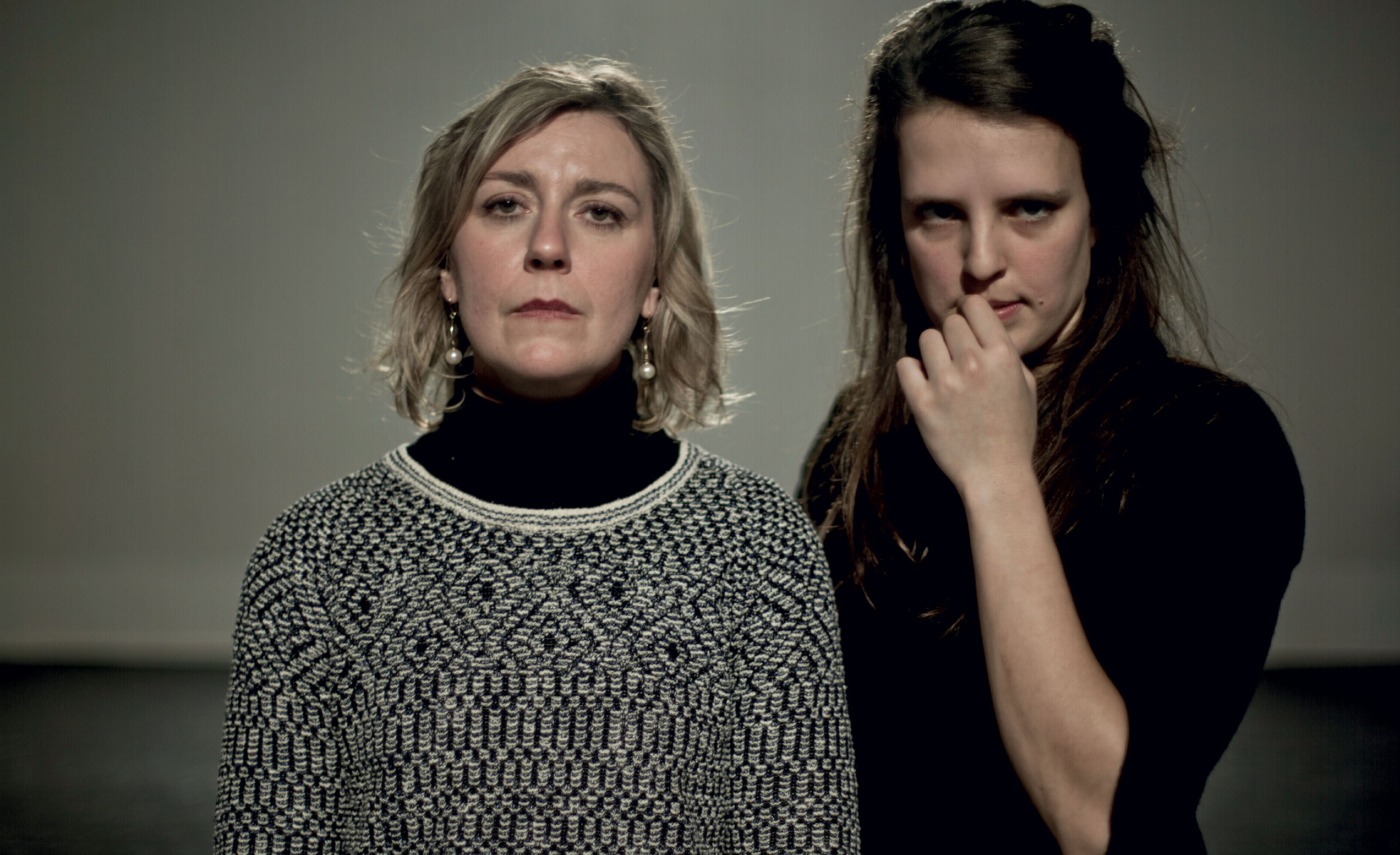 Ghost/Mother: 46 years old, a villager, married, living in Nablus. She has three daughters.

Salman: Israeli officer of Druze origin, proficient in Arabic and close to 46 years of age.

Nadia: The middle daughter of the ghost and the father, 17 years old.

Nadia is the only person who hears the voice of the ghost.

(Nadia is walking through the house. She walks towards a recorder and puts on a tape with Quran. We hear a part of a Surat of Quran at first. Nadia tries to cover her mother’s body with a towel, then gets scared and leaves it on the floor.)

Nadia to herself: When Baba comes he will cover her.

(We hear some noise and the father’s voice saying: ‘Everyone in the mosque is a liar. Not one of them is sincere and I can confirm that because I saw it with my own eyes’, and the mother’s voice on the tape, saying: ‘Now where did you put my shoes?’ Nadia gets scared and stops the recording.)

(The ghost of the mother starts throwing zucchini one by one)

Ghost: Why did you take my shoes? Where did you put my shoes? I won’t be buried without my shoes.

Nadia: Aren’t you dead? Why are you not losing blood?

Ghost: I am, but on the inside.

Nadia: Why is your face not pale?

Nadia: Right, you were ready for Salman’s visit.

Ghost: Where are my shoes? … My shoes have to go in my grave with me.

Nadia: Baba says we might not be able to bury you.

Ghost: You are lying.

Ghost: Where am I going to be buried?

Nadia: Do you remember where you put the money?

Ghost: Do you know who killed me?

Ghost: Why are you lying?

Nadia: Are you telling the truth?

Ghost: How could I remember? I’m dead.

Ghost: Do you want to run away with Amir before you bury me?

Nadia: I will wait until we’ve buried you.

Ghost: Who killed me?

Nadia: Believe me, I don’t know.

Ghost: Couldn’t they at least have waited until after Salman’s visit – then I could have seen him a last time?

Nadia: He’ll be here any moment now, unless he heard the news.

Ghost: Give me my shoes.

Nadia: Okay, where did I put them?

Ghost: In the big wardrobe.

Ghost: And the second pair, those leather ones with the high heels, bring it to me.

Nadia: I haven’t found those.

Ghost: I feel so heavy; I can’t stand up from this chair … Where did your father go?

Nadia: He is sorting out the burial.

Ghost: Honestly, I don’t think my mother will agree.

Ghost: I haven’t done anything wrong.

Nadia: What about the guys who were arrested because of you?!

Ghost: I didn’t get anyone arrested, you idiot! Those were just a bunch of teenagers who pretended to be heroes. They are better off in prison than six feet under.

Nadia: Really? So you’ve decided what’s better for them?

Ghost: Enough! I am fed up with this. I am so tired of talking about this … What do you want? Amir says I’m a collaborator; let him say so.

Nadia: I’ve always been amazed about how evil you can be.

Ghost: They are all assholes anyway … What do you think? … You think they’re heroes? Half of them are thieves, and those are the religious ones; the other half are obsessed with women … Give me a break!

Nadia: You’re always insulting the members of the resistance. This is your way to make your treason less serious … (Nadia closes the windows)

Ghost: What time is it?

Nadia: I don’t know, in this house we don’t have a single clock that is still working.

Ghost: Who is going to wash me?

Nadia: My sisters are scared of the dead.

Ghost: One of the neighbors?

Ghost: I won’t be buried without being washed.

Nadia: If we manage to bury you in the first place. You know, you are not a common dead person …

Ghost: I feel like I’ve been dead for weeks.

Nadia: Ages you mean … I just want to ask you one thing: keep away from mirrors, I don’t want your ghost to remain stuck in there … And don’t touch any of my things; if you need anything I’ll bring it to you.

Ghost: Are you not sad for me?

Ghost: Last time he was sad was when his mother died; he was sad for two minutes and then that was it. And you?

Nadia: What about me?

Ghost: Are you not sad for me?

Ghost: You’re not going to abandon me and leave, right?

Nadia: It depends … When Baba comes back I will decide … Why is he taking so long? Where did you put the money?

Ghost: As soon as I have my grave, I will give you everything … Not before …

Nadia: You know you’re a bad person, don’t you?

Ghost: I’m the best person in the world, and I only accept you blaming me because you’re my daughter, and because you are young … When you grow up you will understand.

Ghost: You will never change. Just keep following that idiot who got into your head, and tomorrow he will throw you away like garbage.

Nadia: Amir is an idiot but at least he is on the right side …

Ghost: What is the right side?

Father (angry): What does it have to do with me? When she was alive she brought shame on me and now that she’s dead she still brings shame on me.

Ghost: He never used that tone of voice towards me in the past.

Ghost: I just don’t remember how things changed. Before, we were traveling to the other side, things were normal, they used to come here, it was normal, life was normal, your father was normal, I can’t remember clearly how we arrived to this point. I just don’t know what to do, sometimes you choose, sometimes you don’t have the time to choose. Things can change quickly, suddenly, and you are obliged to deal with them. To survive, to live. I like living, I am a person who doesn’t like to suffer, people in this society like suffering, I couldn’t shift from good to bad or bad to good … It was all like an accident, Salman suddenly went to the other side, suddenly he went to the bad side, where we were all … I don’t know … yes, I know, I liked him, I loved him … I like to be in love … but things were not clear enough … everything is confusing.

Nadia to her father: Baba, if you don’t find a solution right now, I swear we will bury her, Amir and myself, in the courtyard.

Father: Not in the courtyard … I thought Salman was coming around eleven.

Nadia: He probably heard about what happened, and now he is scared to come to the neighborhood.

Ghost: Talk to him and he will immediately help us out.

Father: He will help, just be patient.

Nadia: If he shows up at least …

(Father nods, then wakes up and drinks some more)

Ghost: Be nice to Salman until he finds me a solution. It’s for your own good, actually.

Nadia: You want help from a person who serves the Israeli army against the people of his own blood.

Ghost: He is obliged to do his job.

Nadia: And are you obliged to love him?

Ghost: There is nothing between Salman and me.

Nadia: Even after the warnings from the faction, Salman kept coming and going in that military jeep and he didn’t even care about what might possibly happen to you.

(Silence, Ghost is thinking, shifts her approach, is trying to be tactical)

Ghost: Please Nadia, bury me in the house.

Nadia: Don’t think that you ‘ve got any power over me like normal loving mothers.

Ghost: And how are normal loving mothers?

Nadia: They are everything you’re not.

(Nadia is zoning out, looking at her father who is sleeping)

Ghost: I know you love me, and you will not leave me like this.

Ghost: You’re not organizing a funeral for me, no funeral prayers, no eulogies?

Nadia: Baba, who is going to pray for her soul?

Father: I doubt anybody would. It’s better we bury her without any prayers.

Ghost: Who is going to wash me?

Nadia: You asked me this question before …

Ghost: I told you that it was over between Salman and me. Why are you so hard on me?

Nadia: You are lying again.

Ghost: Am I the one lying, or is it you?

Nadia: What did I lie about?

Ghost: Just admit that you love me.

Nadia: I didn’t lie about that.

(Nadia moves away and picks up the bottle next to her father. Father wakes up.)

Father to Nadia: Were you talking to me? You’re so tired you started hallucinating …Go get some rest.

Father: Whatever. Do you want some tea?

Nadia: The kitchen is closed.

Nadia: She has the key and I don’t know where she put it.

Father: Why did she close it? I can’t understand why she would lock the kitchen.

Ghost: What day is it today?

Nadia: What day do you want it to be?

Ghost: The day before Tuesday.

Mother: I don’t have any left.

Father: What do you mean? There was some money hidden in the glass under the sink. I saw it when you bought Coke for him, you whore.

Mother: You stay out of this.

Father: Listen, that was the last time he entered my house and that’s it.

Mother: When there is money, you keep your mouth shut.

Father: Every day, people grab hold of me and ask me about him. We have a girl in the house … It’s shameful!

Mother: But you are here so what’s the problem?

Father: Sometimes I am not here.

Mother: Salman is coming today in the afternoon, try to be here.

Father: Are you not afraid to get shot? How many times did they warn you?

Mother: Stupid kids, they just want to act tough. What are they going to do, huh?

Father: Maybe they will threaten me. Maybe one of them is impulsive, and one day his knife slips on my throat …

Mother: You just worry about yourself, you coward.

Father: As from now on, consider me not present in this house any longer. I don’t have anything to do with this.

Nadia: When were you ever here? Anyway, I’m going out this afternoon.

Mother: Salman is coming this afternoon. He wants to talk to you about something.

Nadia: I don’t want him to talk to me about anything.

Mother: Just listen to him, then …

Nadia: I know. He wants to talk about Amir.

Nadia: Clean your mouth, there’s powder on your lips.

Mother: Will you be back, then?

Nadia: I will be back.