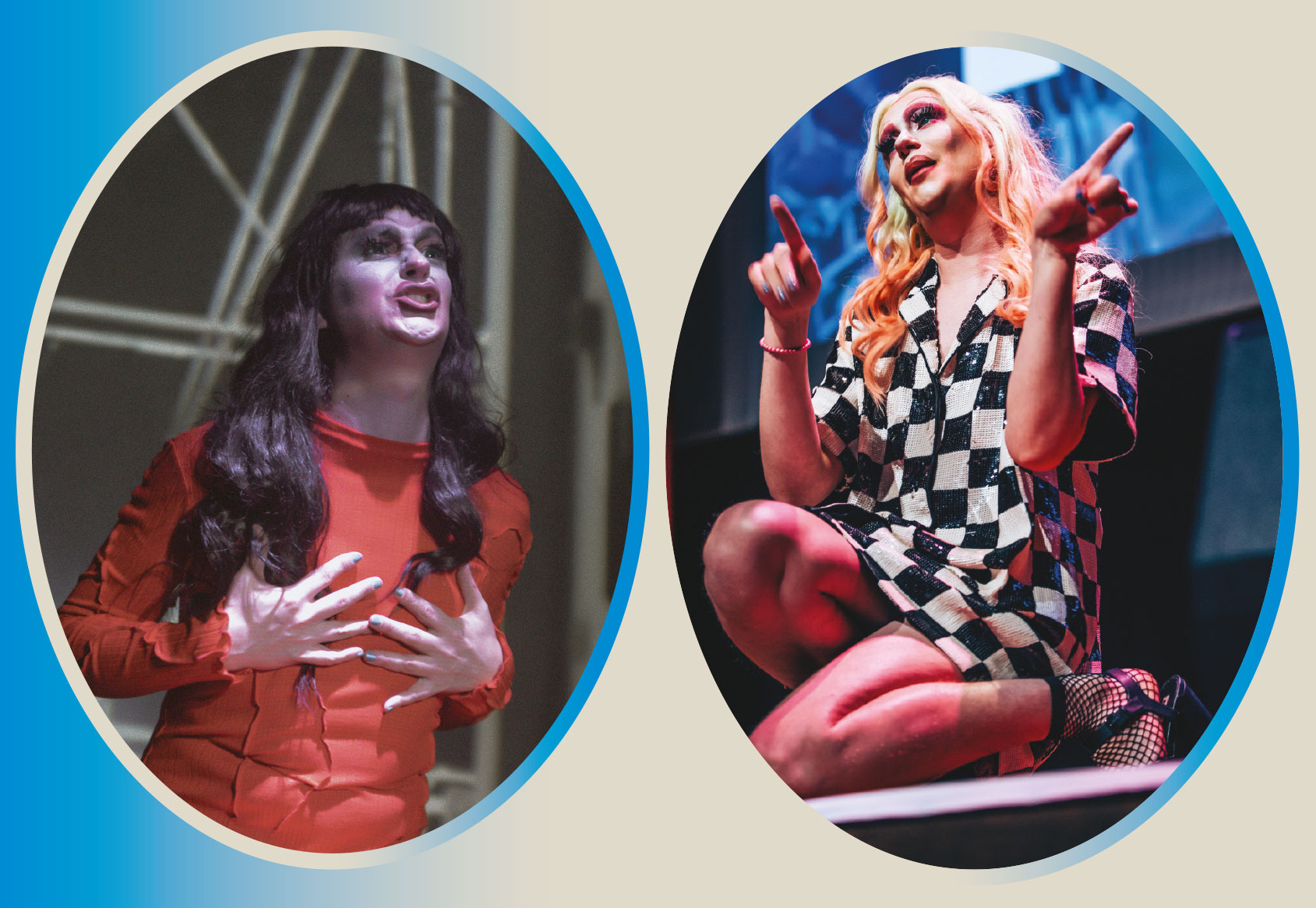 Performance in the post-internet era

Drag is gaining popularity and visibility at a rapid pace. With the body as a canvas and the internet as its inspiration, an exciting playground emerges for the drag artist. Simon Baetens zooms in on this whimsical art form.

Drag uses the body to question social conventions. The exact origin of the term ‘drag’ is difficult to pinpoint. According to the most plausible theory, the word finds it origin in the Elizabethan theatre. Male actors portrayed female roles dressed in long garments that trailed or ‘dragged’ across the stage. Today it’s a collective noun for performative gender expressions. In 2018 I founded the drag-collective House of Lux along with 4 friends. Since then I have been performing as my drag-alter ego Electra in a myriad of contexts, ranging from nightlife to weddings to theatre venues.

Drag: more than a dress-up party

You create a drag character using wigs, make-up, extravagant costumes and accessories. You could describe it as a sort of alter ego that accentuates certain physical features or personality traits. This second personality might help you become closer to who you want to be, but who you are not or can’t (continuously) be because of different reasons. This is where you find the liberating aspect for a lot of drag practitioners: to experience a side of yourself that is usually minimised, hidden or even suppressed.

My drag character Electra is an extension of myself. Because of Electra I get to live out a fantasy I’ve clung to my whole life: being a pop star who gives entertaining as well as disruptive performances. A lot comes together in these performances: my love for the stage, my fascination with and knowledge of pop music and pop culture, but also nerdy hobbies like making Powerpoint-presentations from song lyrics.

I view it as a layered game of exaggeration and confusion. It is not just a dress-up party. For a lot of drag artists there’s much more at stake than just looking like ‘the opposite gender’ as convincingly as possible. Especially now that the research into and the discussion about gender identity are evolving faster than ever before, there is more than enough room to perceive gender expression as a provocative and theatrical art form. To say it in the words of drag queen Sasha Velour: “Gender is a construct, tear it apart!”. The political power of drag is not to be underestimated. It offers marginalised bodies the possibility to cloak and transform themselves. Thanks to nightlife entertainment and the internet they get a platform and visibility.

The body in drag

The outfits, make-up looks en hairdos of drag characters don’t just arise out of thin air. Drag is always a citation. Movies, comic-books, video games, popstars and visual art are only a few examples to which drag artists refer, sometimes very explicitly, but other times unbeknownst. As Electra I’ve worn outfits based on the iconic drag queen Divine who played in the John Waters movies, a Sim of the eponymous videogame or performance artist Marina Abramovic.

Beneath the external appearances of drag queens, kings and other creations, there’s always a body of flesh and bones tucked away. Because of the extensive transformation that the drag artist undergoes, the status of that body changes. A corset for example, creates a very narrow and thin waist accentuated by padding that enlarges the hips. Such a transformation almost never strives for a realistic effect. Drag looks are imaginative and sometimes even flirt with the cartoonesque. Once the metamorphosis is complete, ideally you don’t see the separate elements that create the magic anymore- although ‘meta-drag’ is also a style in itself. In it, the emphasis is purposely put on fake breasts or make-up that is only partly finished to underline that the person is in drag. The building blocks become a visible part of the look itself.

So a body in drag is always a construction, a hybrid, an amalgamation of the performer’s own body and the inspiration to which it refers. Drag does not situate itself outside of the convention, but plays with what is prevalent or the norm. By amplifying the convention, by  questioning it, celebrating it, ridiculing it, worshipping it, and performing it, drag highlights the rigid boundaries of the normative. Without a norm that can be questioned or toppled there is no drag. The performative power of drag is situated in the dialogue between what is found ‘conventional’ and what is ‘dragged’. Drag is always out of place; subversion and drag go hand in hand.

As Electra for instance, I like displaying the lyrics of the song I’m lipsyncing to visually, to direct my audience to the meaning of the songs. Electra has something awkward about her when she is on stage. I find that displaying the struggle of somebody who very much so wants to perform and convey a message but is physically almost incapable to do so, is a fruitful strategy to unify amusement and alienation. Electra doesn’t always survive her performances. With her subpar make-up skills, gawky dance moves and dopey digital collages Electra questions what it means to be good at something. I try to view those shortcomings as qualities. 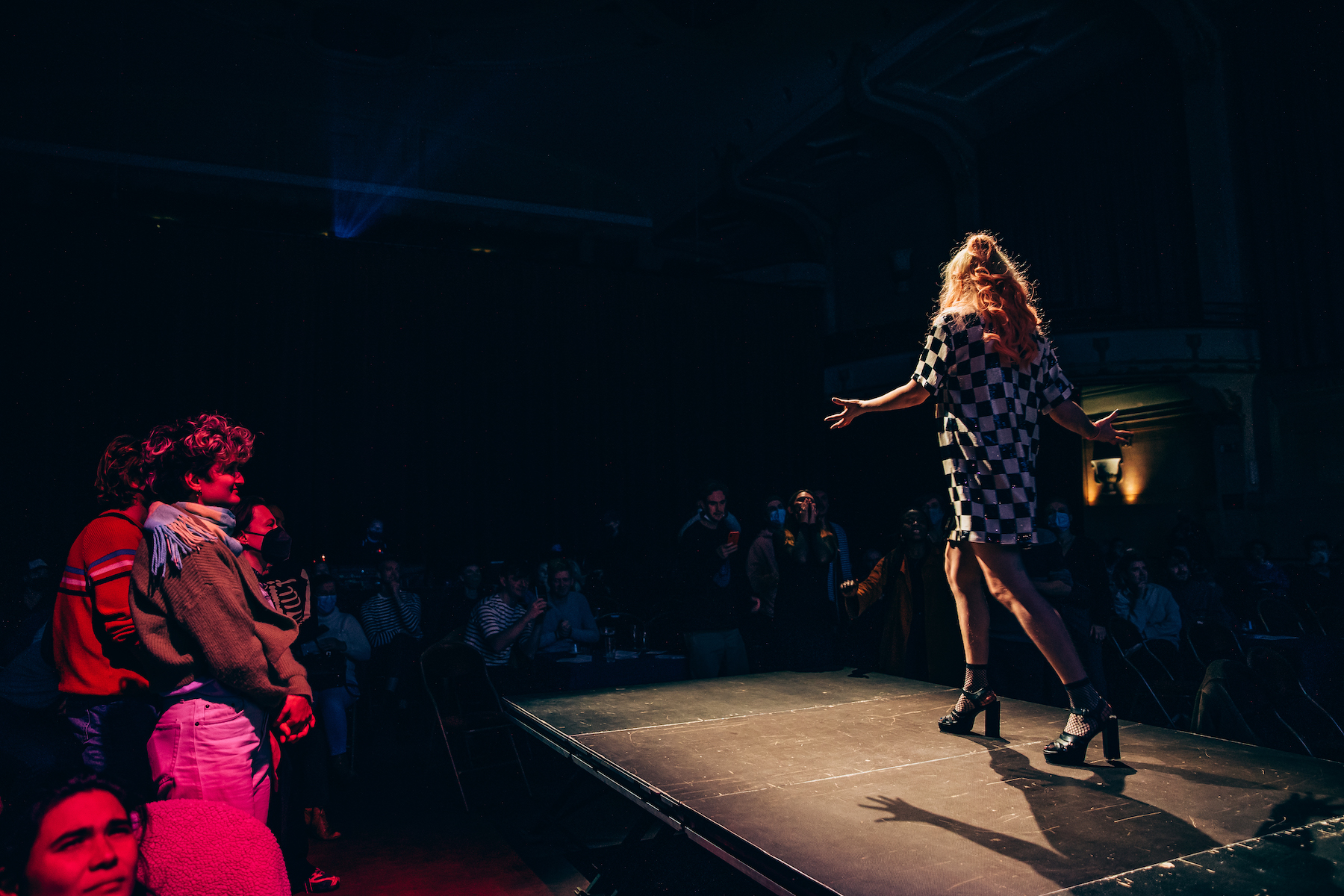 In the digital era, with its cornucopia of accessible visual information, what does it mean to work with found images? How do you quote something that is solely digital and has been so removed from any context that it becomes an ‘empty’ image? A growing part of Youtube for example, has been altered by ‘Stan Twitter-videos’1: short clips from interviews, tv-shows or reality-shows that are used as reactions on Twitter. Because of their short timespan an often comical content they are highly addictive and easily rack up views. With this kind of online material it doesn’t really matter if you know the source of the clip. A bit of context and knowledge of pop culture helps, but you no longer need to be a super fan of a tv series (or even have seen a full episode) to be able to use quotes from the show on social media, or in conversations with other people who are familiar with this kind of content.

A clip in which two ‘real housewives’ insult each other, or an absurd joke from SpongeBob SquarePants are at second glance no more than light entertainment. When someone runs off with this sort of ‘snackable content’ it might just get interesting. The core of most drag shows is a lipsync performance, in which the performer playbacks to an existing (pop) song or other (audio)material. Often the performers make a mix of multiple (well known) songs and fragments from movies, tv-shows and memes. The American John Epperson portraying his drag character Lypsinka made this his absolute trademark. In her performances Lypsinka inimitably switches between fragments from different theatrical Hollywood-films. Lypsinka has been around longer than the internet, meaning Epperson assembled the tracks to which she performs analogous. Today, this assembly technique is gratefully used by drag queens all over the world. The internet turns everything into public domain, which makes the combining of multiple sources easier than ever.

It’s in the composition and theatricalisation of found objects from pop culture that you can  show your individuality as a drag performer. Electra for example, has made it her mission to reinstate guilty pleasures like the Crazy Frog, by using his music or even dressing as the frog herself. Krasna, a performer of the Ghent collective Vile Motif, uses songs by Britney Spears but mixes them with fragments of the Communist Manifesto which gives it a political charge. Outfit, scenography, and the scenic presence of the performer make it that every lipsync becomes a do-it-yourself-gesamtkunstwerk of sorts. The unique combination of a poppy aesthetic, humour, entertainment, freeing gender expressions and current themes make drag a language that goes hand in hand with the iconoclasm of (post-)internet culture.

On paper, drag is a relatively democratic art form, even though acquiring all the necessities will cost you a lot of money. But in principle everyone can do drag, most performers are self-taught. There is however a rich culture of ‘drag houses’: chosen families who introduce each other into the drag scene and combine their qualities to be more resilient. Close friendships form along those who work together, coach each other, perform together or organise shows together. For long, this was a common way of getting started in drag. But because of the internet everybody has access to millions of make-up tutorials and instructions on how to style a wig, edit music, and make costumes. As follows, today a lot of drag artist make their debut on social media, where they’re able to acquire a great following before ever even having performed. Furthermore, performing isn’t the ultimate goal for everyone who practices drag: for many it limits itself to the curating of an online persona. 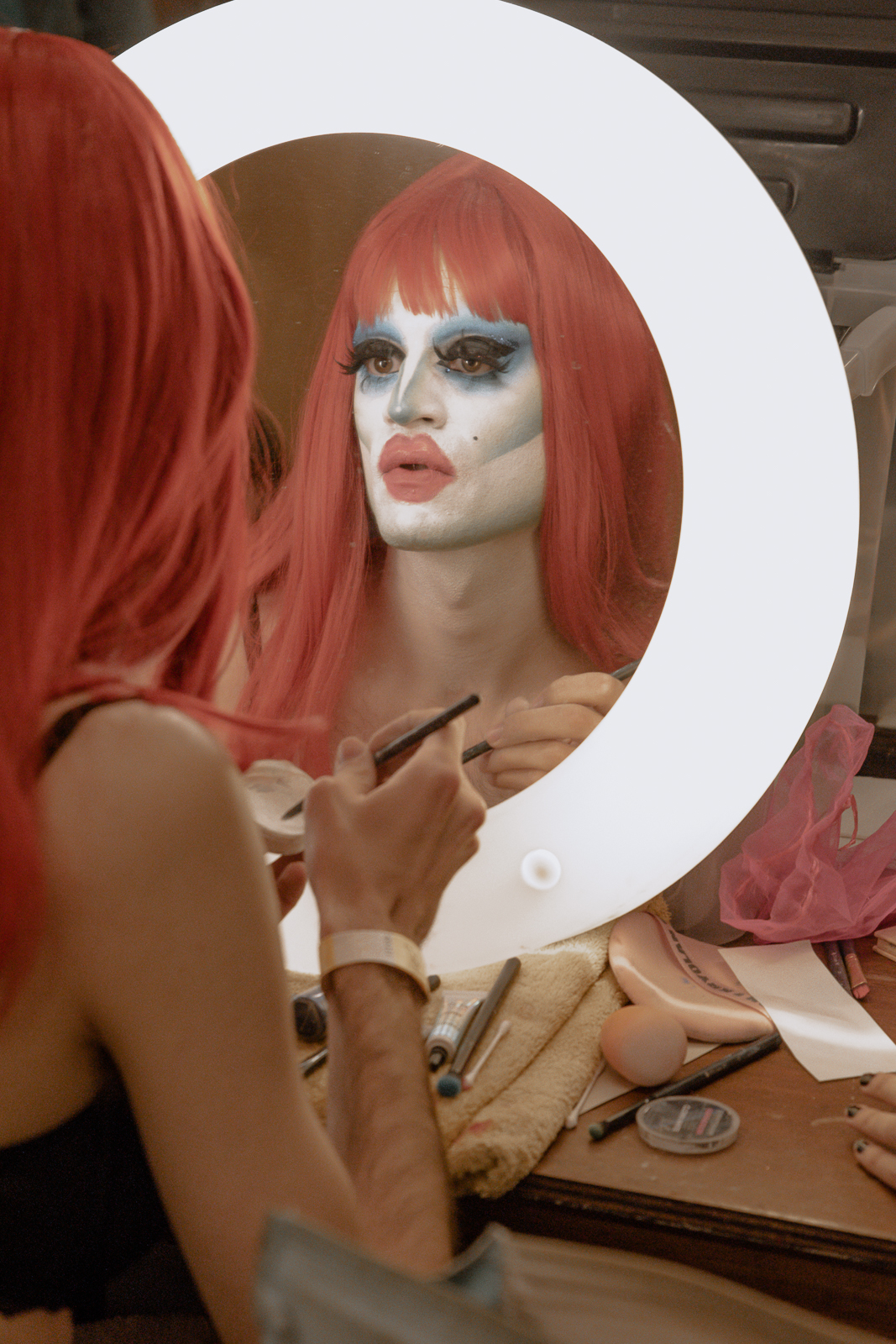 Because of the approachability and visibility of the medium, drag artist are able to respond to the news or the latest happenings in pop culture. Even faster than fast fashion brands like Zara copy runway outfits and sell them for next to nothing, drag artists recreate and mock viral moments in their shows or on social media. More often than not, they are the source of videos and images circling the web at the speed of light. Just recently I saw a clip of burlesque performer Violet Chachki, who, at a private party in Paris, falls through the slate of marble on a coffee table serving as a podium. Apart from the memes that were already being made, the instance is also undoubtedly used and referenced to in performances by other queens. But also more profound topics like the Black Lives Matter-movement or the fight for equal rights and treatment of trans people inspire drag and make for some politically oriented performances.

At a drag show we see the body of the artist continuously dialoguing with the cited material. By referencing images that have been edited to such an extent and are so widely spread that the idea of an original is rendered useless, the performer gives physicality to something that before was merely a compound of bytes and pixels. A whole new definition of authorship en origin arises when the internet is used as a public toolbox. Drag speaks a language that is hyper intertextual. The dragbody is a palimpsest of popular culture that is impossible to reproduce, completely individual and yet recognisable. The cross-pollinations that are created often end up becoming part of pop culture themselves. This makes the entanglement between source and citation even more complex, until the differences ares impossible to distinguish.

Drag might just be the artistic language that is most durable against, and at the same time in cooperation with, the dizzying amount of information that penetrates our life through multiple electronic devices. Because of its grotesque en playful handling with performance and the juxtaposition of elements from all kinds of layers of visual culture, it holds up a mirror without being too pedantic about it. With the body as its main weapon drag claims the momentary, the elusive ecstasy of the collective movement. The body of drag is continuously changing. It adapts to new surroundings, but not without the necessary glitches.

By embracing those glitches, those moments of confusion and overstimulation, cracks form in reality. What is otherwise obvious, drag shakes up and turns it inside out. Drag shows us that our relation to the digitalisation of our world is not black and white: we can enjoy it as well as look at it from a critical point of view, even though that requires a lot of knowledge, alertness and creativity.

1Stan Twitter is a community of a (pop)artists superfans who are very active on Twitter. The word ‘stan’ refers to the song ‘Stan’ by rapper Eminem. It’s lyrics talk about an obsessed fan. Today the word ‘stan’ is synonymous with dedicated fan. 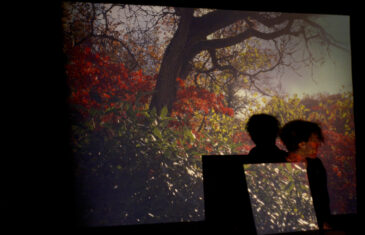