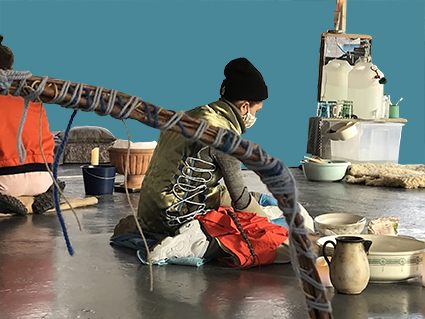 Daniela Bershan and others – OCEAN

OCEAN, or the touch of a relational lifeworld

Sometimes, a performance, a work of art, reveals its timeliness in a time that does not favor its public appearance. Circumstances happen, and they hinder its reception, and while the work of mounting a performance for few occasions for too few spectators might seem disappointingly vain to its makers, the performance still finds other ways of working through to us, reaching the spectators who couldn’t experience the full event. Like sprouting new tentacles that will extend it into other modes of existence –a map, a conversation, a rehearsal, a rumor – the work begins to live in the mythical glow of incompleteness. This condition is not unusual for those artworks of which we cherish the most vivid memories even if we only saw a glimpse of them.

I was among the few clandestinely drawn into the circle of OCEAN during its rehearsals in March 2021, when arguably, the pandemic with its austere restriction of public gatherings suspended the performing arts at large. In a glass building (Kanal Pompidou), originally devised for showcasing automobiles on a busy junction in Brussels (Square Sainctelette), a ritualistic performance sculpture transpired for what seemed to be long hours. Indifferent to the noisy traffic outside, which recalled me to a world ominously threatening to choke us, we gathered around a circle in which three persons dwelled and, at times, occupied themselves with laborious actions. One was kneading dough for bread, while another one was preparing tea in a samovar; the third one singing. The chant seemed to color a long breath: a motif of a few tones patterned like a call (question) and response, ascending and descending, and repeating over and over again. The circular motion of the chant emulated the rhythm of breathing, evening out long inhalations and exhalations. It reminded me of the exercises in which one calms their spirits, or a mood of distress, by breathing into and with the whole body. The ‘songing’ of the breath served to sharply separate out the time-space of OCEAN set against the city.

Over time, I, and probably other souls in the room, began to attune to this rhythm. I noticed that it removed the perception of measured units and blocks of time, and it blurred the boundaries of the beginnings and endings of actions and objects in the space. The circle was not closed, it was full of holes and openings, and the objects hanging above it seemed to follow a sculptural rhythm of both tactile materials and meaningful things, like a glove, a tool, something raw coming from the woods, and a plastic shiny product, all mixed up without any narrative order. The breath and the blurry porous actions and objects opened a vast space, like a giant body that engulfed me and swallowed me. I fancied swimming in the vagina of a whale, in a gentle swaying rhythm of large contractions. The image resonated with me for an indefinite time.

Later on, I recalled a method for feeling the similarity and the dissimilarity between bodies breathing, and of experiencing emotion through breathing (Shruti Desai and Harriet Smith, “Kinship across Species: Learning to Care for Nonhuman Others” Feminist Review 118, 2018). In an experiment on kinship across species, children were instructed to follow and observe animals in a city animal farm, eventually attempting to emulate their breath, “breathing ‘as if’ like the other, and thereby directly experiencing the other’s rhythm as a form of being-with.” Desai and Smith elaborate on Vinciane Despret’s notion of embodied communication rather than empathy:

Experiencing with one’s own body what the other experiences: it is creating the possibilities of an embodied communication. The ‘as if’ constructs partial affinities between bodies, it is a creative mode of attunement”1

The grip of an individual as single self, and their boundedness in a fixed and discrete body, are loosened. Had I been incited to co-breathe in a task resembling therapy in this performance, I would have probably resisted it and left. The song drew me imperceptibly in it; it was not not unlike those moments in which one partakes in relations of which one is unaware.

Three persons were performing I say – unsure if I am to identify them as women (Sara Leghissa, Aubrey Birch and Daniela Bershan). The gender didn’t seem to matter much, as long as their expressions didn’t gender the labor of care and nourishment traditionally attributed to women. Their peculiar costume suggested a hybrid of work suits, with multiple protective accessories, layered in the manner of a quasi-self-made bricolage; an unlikely combination of futurist and tribal stylistic features (designed by Sabrina Seifried). Our eyes met in tender neutrality: we acknowledged each other’s co-presence without asking anything of each other. I gladly accepted a cup of tea that warmed my limbs in a perennially cold exhibition space. This gave me a tacit permission to co-habit the place with the others as if it was made to host me, but not service my senses in any spectacular way. I became more curious and attentive to sensorial qualities of the performers’ simple actions.

In 2022, care is debated differently than in the 1970s when the Marxist feminists raised the political issues of social reproduction, being perpetually in crisis as long as capitalist relations of production persist. Now the critical emphasis might not be any longer on wages mainly as an instrument of gender inequality and exploitation of women (‘wages for/against housework’). The intersectional perspective taught us about the colonial, imperialist, racial and class-exploitative dimensions of reproductive labor in the affluent West, and that it is never about women only. Along with the intersectional analysis of care, we must read ‘ocean’ as a capacious metaphor, indicating not only a vast ecosystem of interdependencies across species, but a historical grave of slave trade during the Middle Passage. “We can write Atlantic on the Ocean. It only says so much about what is really there.”2

If there is a political question that Bershan, with her collaborators, is drawing our attention to here, it concerns the value of such labor. Joan Tronto commented on a vicious circle of devaluation of care and caregivers:

Just as privilege can protect the privileged from the details of care giving work, so too the absence of privilege means that those who are less well off are closer to the real world of care. Care is difficult work, but it is the work that sustains life. That care-givers value care is neither false consciousness nor romantic but a proper reflection of value in human life.3

Bershan infuses the repetitive acts of maintaining life – featured in simple, but highly symbolic acts of sharing grain food, tea and breath – with the sensuousness of touch, slow repetitive rhythms, and bodily rest. Thus, another point of boundary struggles, as Nancy Fraser dubbed it, is added to the binaries of work and nonwork, creativity and tedious maintenance, and that is the mixture and possibly also dissolution of pleasure and pain. Perhaps this is also the reason why Bershan rephrases ‘taking care’ into ‘making care’: 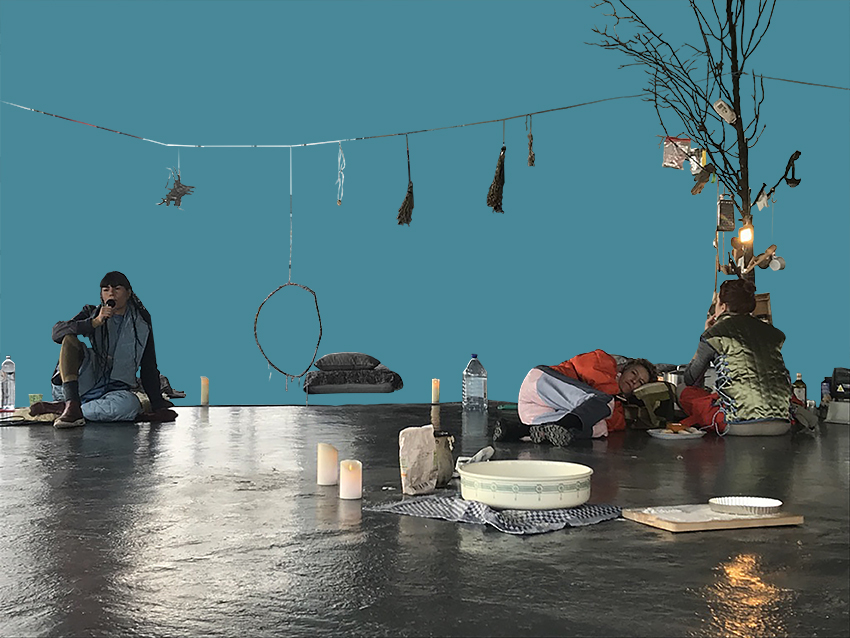 We would leave the margarine out for a while to soften, and then we would pinch the little pellet to break it inside the bag, releasing the rich yellowness into the soft pale mass of margarine. Then taking it carefully between our fingers, we would knead it gently back and forth, over and over, until the color had spread throughout the whole pound bag of margarine, thoroughly coloring it.5

Yet for Bershan the effect of the ritualistic act must be underlined: “every time I repeat something, it gains muscle and weight” (from a talk at Berlin Week 2021). Repetition exposes the act of reproductive labor and draws our senses in, in order for us to feel and recognize the act as something of value, and something we could also take a pleasure in when we share it with others. It provides the link between the micro and macro-scales of action, wherein politics, for Bershan, lie: “micro-intimate practices rehearse macro-political change.” In all their imperfection and incompleteness, the self-organized practices of maintenance and care are the site of a wager: “How might life – or the last year – look different if we valued the care we do for ourselves, the world and one another at premium?” Bershan asks paraphrasing Silvia Federici (Inside Making Care map 2021). The politics is one of prefiguration, setting an opportunity for an experience or an example of an alternative vision of life, centered on relations of interdependency and nourishment.

For all my thoughts, I hope to live with OCEAN once in its full length, with many others, in a city where people will pause to deliver themselves to experiencing this question with their senses. 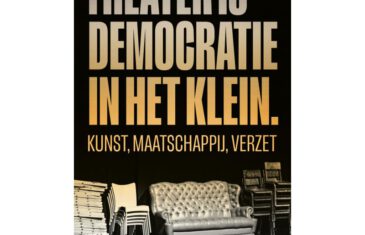 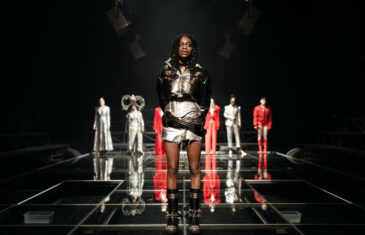