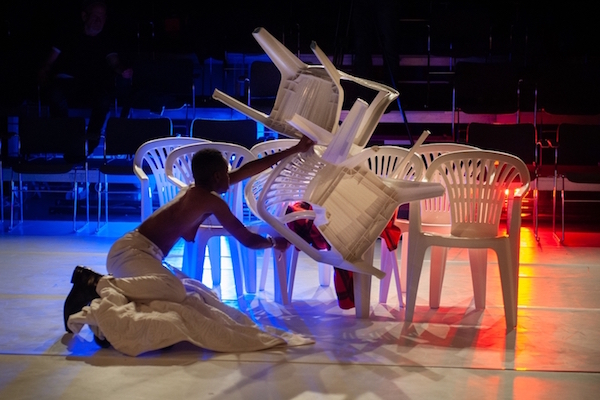 “You have to sit on the side of the stage. You’ll see that when you enter you have the option of sitting on the left or the right. In front of or behind the stage. Sit on the left or the right”, a friend cautioned as we separated and I made my way to Dana Michel’s performance Cutlass Spring. Upon entering the black box the audience must choose which perspective and subsequently which position they wish to occupy for the duration of this piece. This introductory question is one of many which Michel, a choreographer and live artist, asks us to consider.

In a text written to accompany Cutlass Spring Michel uses “No Fixed Positions. No Fixed Positions. No Fixed Positions” as a header. She ends this particular passage by stating: “My offering is a repository that remains open to interpretation, a vast space for encountering and broadening one’s own logic of seeing and experiencing.” The invitation to decide where to station myself, be that in the designated, permanent seating area, or to the left or right of the stage as suggested to me without explanation, is a reminder that there are a set of perspectives that have been imprinted, imposed, or recommended, which I have been expected to validate and adopt. Cutlass Spring underscores how intrusive, ostracising, and isolating these imposed narratives are for Black women and others who are accustomed with the blessings and burdens of balancing various ways of both seeing and being seen.

There were several moments during Cutlass Spring where members of the audience broke out into laughter. Michel uses her body and everyday objects including a fork, a metal tin, and plastic bags of ice, maneuvering across, along, and sometimes behind the stage. This performance begins with the artist moving around on a beige plastic caster, using her knees to inch forward towards an empty row of white plastic chairs. The fork which she removes from her skirt, becomes a claw, which is used to gain traction as Michel inches her way closer to the first row of plastic chairs. She attempts to seat herself in one of the plastic chairs, and in one swift movement she appears to fall, but recovers. Several of her actions inspire apprehension and anxiety. At times she grunts, or seems to speak in a language which is incomprehensible. Enveloped in her movements, she invokes a sense of desperation as if there is a consequence awaiting her should she not succeed in completing her work.  As she shifts and swerves she conjures intrigue and empathy. In other words you want to see her finish what are seemingly tasks without clear objectives. These “odd jobs” describe a relationship between enforced domestic labour from a past who’s shadow continues to loom over the present. These odd jobs reflect that process which makes degrees from these “formerly” occupied lands invalid in this time and in this place so that those who could be journalists or doctors work in construction or kitchens. The work of the artist also conjures those meaningless movements which People of Color are expected to undertake: yield without fail when walking in public, swallow the syllables in your non-Western name, open your bag for inspection at the grocery store even if “the other” person in front of you was not required to do so, never flinch when someone tries to touch your hair or your skin. During the performance Michel unfolds herself out of a tartan overcoat and skirt, wearing athletic boxer shorts underneath. Minutes later she releases ice cubes from a clear plastic bag which she moves across the stage by flailing her limbs while lying on her stomach. Later still the artist sits on top of a metal tin which “sounds off”, in an effort to silence the voice from within. These particular moments have elements which gesture toward a time of bodies lost at sea, of clothing removed for inspection and appraisal, of silence and subservience imposed through facial masks with built in bits.

“What other casualties have there been”, the artist asks in another text related to Cutlass Spring. The bridge between these tragedies extends all the way to a question which Michel describes herself as “roaming” in. “Cutlass Spring is what sex might mean to me right now. I will roam inside a question: How might I locate my sexual identity within a multitude of complimentary and seemingly contradictory identities.” In this excerpt taken from an additional text commenting on this piece credited to Michel and Michael Nardone, her list of identity markers include a performer, a mother, a daughter, a lover, and a stranger. As a viewer and as a witness thus far to dialogues and discourse in the year 2019, Michel’s work also asks me to consider how race and gender require the artist and perhaps other Black women to locate themselves, their sexual identities, amongst a set of rules, codes, and an agreed upon logic which largely excludes the experiences, scholarship, opinions, desires, and the scrutiny of Black women.

Cutlass Spring was presented as a part of the Kunstenfestivaldesartes at Beursschouwburg. Activist Rachael Moore and I were asked to facilitate a workshop which addressed points and questioned raised in Michel’s solo work. In her writing, Michel mentions a lifelong interest in “sex stuff”, explaining that an early curiosity surrounding sex resurfaced when her own child started receiving sexual education. Cross culturally speaking it’s not uncommon that many of our parents resisted speaking to us about sex. In preparing for this workshop and thinking about Michel’s piece I reflected on the untold sexual practices and identity markers of People of Color prior to colonialism, some of which have relationships with contemporary “western” terminologies, discourse, and dialogues. When I hear about the alleged inherent homophobia and transphobia in Black communities, I think about Ancestral Wives and Female husbands. It is often left unsaid that what appears to some as a new, modern expansive way of viewing others exists in parallel to very old traditional customs and practices which have been hidden, erased, forgotten, or deemed unimportant. Her interaction with ordinary objects in ways which are unfamiliar and impractical she gestures toward systems and structures founded on paradoxes which she reminds us are illogical and absurd. Cutlass Spring considers the effects of repressing authentic expressions of self and conveys poetically what it feels like to wade against waves of oppressive force.