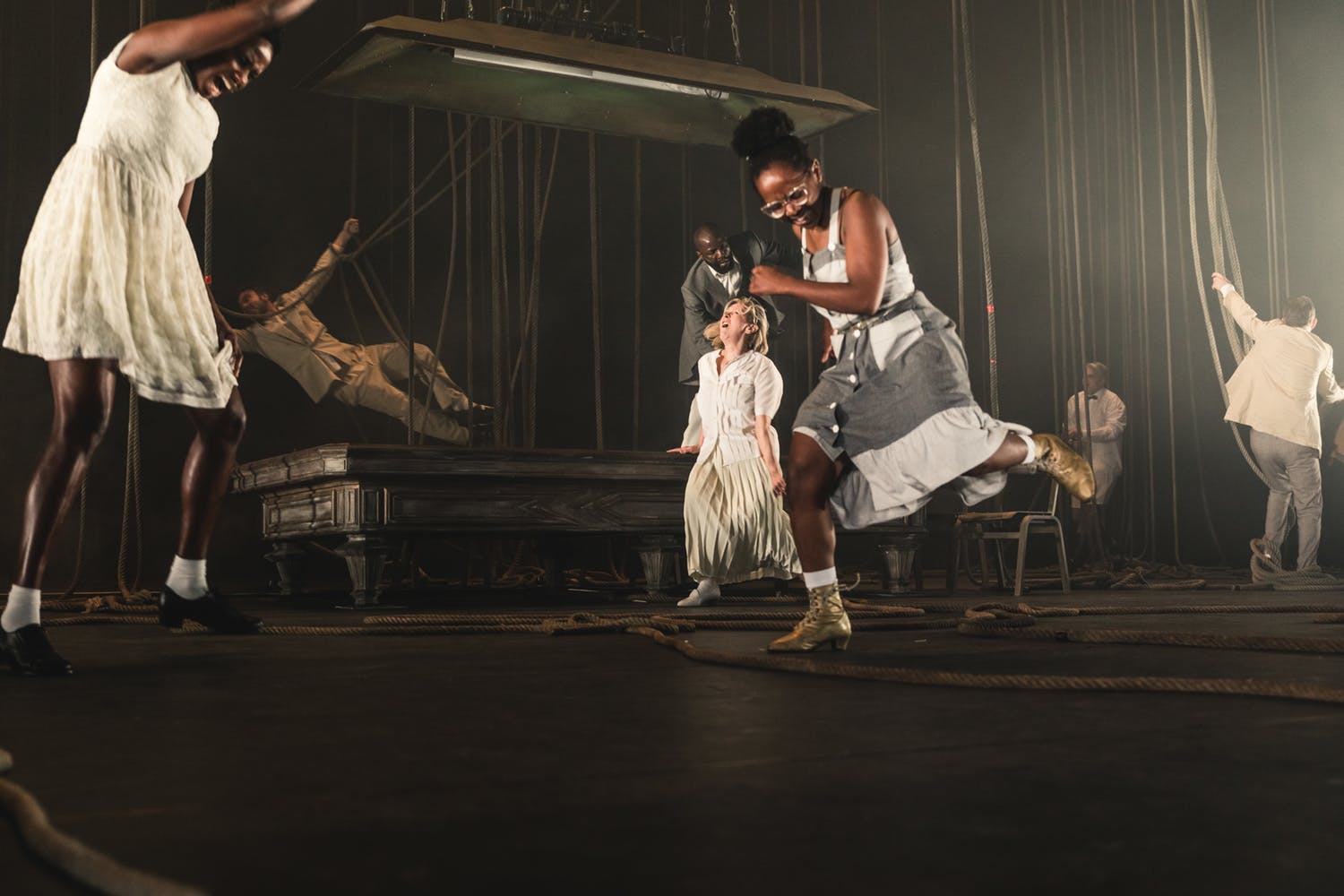 A continuous conversation, not a hot topic

With the reopening of the Africa Museum in Brussels and the Same Same But Different festival in Ghent, Belgium’s colonial history and decolonisation have become much debated topics. Two recent productions (Luk Perceval’s Black: The Sorrows of Belgium and Roland Gunst’s Flandria) have been notable for what they reveal and add to the discussion.

As a white, Scottish immigrant in Belgium I’m quite uniquely placed to observe this national soul-searching; simultaneously an insider due to my whiteness but also an outsider due to my recent arrival to Belgium and lack of personal attachment to its national shame. In the process of trying to understand Belgium, it’s become clear that a central aspect is its colonial history and how Belgian society reckons with that past and moves forward.

Black: The Sorrows of Belgium

NTGent’s latest work Black: The Sorrows of Belgium has already been lauded and praised for daring to delve into Belgium’s dark history, however the end result is deeply disappointing and indicative of the inherent institutional problems in Belgian culture and society. At its simplest Black is all about black suffering at the hands of white people, directed by a white man, consumed by an overwhelmingly white audience.

The narrative choices are puzzling. In the programme the creative team recognizes the impossibility of telling everyone’s stories, asking who gets included or excluded? With the wealth of history and personal stories to tell, it’s bizarre that they chose to put American protagonists centre stage. Admittedly, William Henry Sheppard’s story is interesting and unique, as a Black American missionary in Congo he was known as Mundele Ndom ‘the white black man’ which puts him in a problematic position. Simultaneously the victim of racism at home in America, whilst also part of the ‘civilizing’ effort to convert the Congolese people, as well as being an outspoken critic of the colonial atrocities who was largely lost to the history books. Undoubtedly it’s excellent source material and a story that needs to be told but I’m not sure how well it actually fits for a show subtitled The Sorrows of Belgium. The introduction with American Deep South blues music, American missionaries, American politicians wanting Blacks to ‘go back to Africa’, provides a framing device that does expand the issue of racism to the globalised, Western world but also dilutes it and takes some of the focus away from Belgium. Were there really no Belgian critics of colonialism at the time? Does it take an outsider to make you see the brutal reality? Is Belgium’s wilful ignorance one of the titular Sorrows?

Watching Black, I was constantly questioning if it’s actually radical or just gives the impression of radicalism. After all, who is this piece for? Who benefits from depictions of black suffering? I doubt it’s empowering for the (notably few) black people in the audience. Or does it allow the white audience to pat themself on the back for how ‘progressive’ they are? I don’t think this is a piece for black people. It feels like a show for white people to start dealing with their white guilt. Throughout the piece, who gets to speak is rather troubling. The actors’ radio-mics allow their voices to carry behind the audience, rarely declaiming and filling the space like collective ghosts come back to haunt us. The roles they play are largely dictated by their skin colour: in one particular scene, Andie Dushime is forced by Peter Seynaeve to give a lecture on slavery. It’s intended ironically, and it is funny, but it’s still a black woman being made to relive black trauma at the behest of a white man for a white audience. Does it really critique abusive power structures or does it just replicate them onstage?

As Heleen Debeuckelaere said in a recent panel at Vooruit, decolonisation is a process, so perhaps it’s best to treat Black as the clumsy but well-intentioned step in an ongoing conversation. Pretending that it’s flawless and without problems is like saying Belgium has now solved all its problems because it’s started a conversation. Other works will supercede it and add to an even richer understanding of what it means to decolonise. 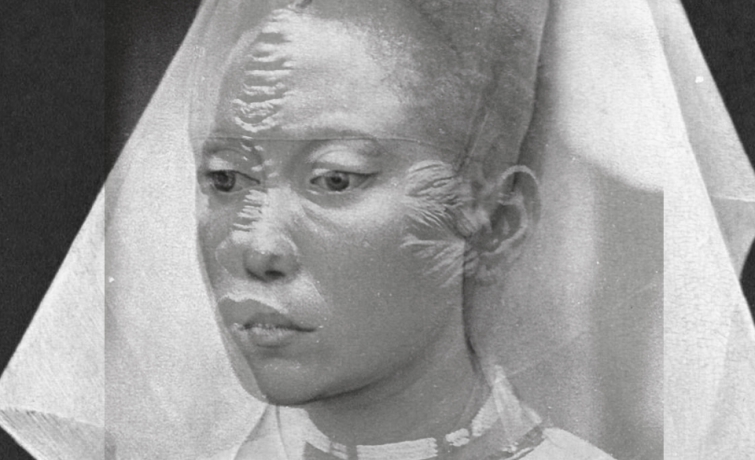 One such example is Roland Gunst’s Flandria. This original mixture of lecture performance and music theatre also delves into Belgium’s dark history but finds a refreshingly optimistic vision for Belgium’s future without resorting to heavy-handed moralizing. An operatic retelling of Hendrik Conscience’s historical call to arms against Francophone rule, The Lion of Flanders, via the prism of Gunst’s mixed-race, Flemish-Congolese autobiography; this alternative history lesson provides a manifesto for an ‘Afropean’ Belgium. Its format is relatively simple: Gunst’s text is juxtaposed with an operatic performance reminiscent of The Lion of Flanders (1838) in which symbolic noblewoman, Flandria, longs for her love and saviour, The Lion, which Gunst comes to represent throughout his lecture.

Soprano, Emma Posman, as Flandria, ritualistically and rigidly patrols the stage, encircling the miniature castle in centre of the stage. In white, medieval regalia and only able to communicate in the ‘high art’ of opera, she’s a symbol of power and privilege, the personification of Old Europe; paradoxically restricted and imprisoned by her own position and tradition. Gunst on the other hand, has a foot inside and outside the system, by virtue of his Flemish-Congolese identity, and is thus better positioned to free Flandria from the prison she created for herself – after all, the symbol of Flanders is a black lion from Africa. It’s an ingenious observation that refutes decades of colonial, white supremacist assumptions. Moreover it defies expectations of what the (white, privileged) audience is primed to expect from art about race and identity – instead of brimming with revolutionary anger, Flandria is considered, slow and meditative. Gunst explains that being mixed-race means that burning the whole European system down (however corrupt it is) means burning down a part of himself – it’s an act of self-mutilation in addition to the inherent violence of assimilation. Thus what follows isn’t some dramatic tale of revolution but a modest proposal for reconciliation and genuine cultural exchange between equals (rather than so-called assimilation which places the onus on anyone who isn’t white) to create something new that’s neither African nor European but Afropean.

The ideas in the text are rich, encouraging reflection and debate, especially the hypocrisy of Flanders being the beneficiary of colonialism whilst also claiming to be oppressed by the neighbouring French – it’s a narrative that feels uncomfortably familiar, although in my home country of Scotland we tend to play up the victimhood and downplay the colonial atrocities. However, these complex ideas are not complemented by the libretto and stylized gestures in the operatic segments. It does little more than illustrate that European ‘high culture’ is largely unfit for purpose nowadays and that we need to find new forms to reflect and engage with the contemporary, superdiverse world. I suspect the Flemish libretto and some of the theatrical images might have greater resonance with a Flemish audience. Additionally some technical hiccups with out-of-sync surtitles meant that the interactions between Gunst/The Lion and Flandria were rendered incomprehensible. Despite some of the jarring elements between the text and the music, Flandria offers a future with more nuance, empathy and genuine exchange, rather than simply placing black stories into a white, European art form.

There’s no doubt that the best is yet to come for Belgian decolonial work provided decolonisation remains part of a continuous conversation and process, not just a hot topic that’ll be quickly forgotten. Fingers crossed Congolese artists like Faustin Linyekula and Michael Disanka are finally granted visas in the future so they can present their work. After all, a conversation requires both sides to be present.