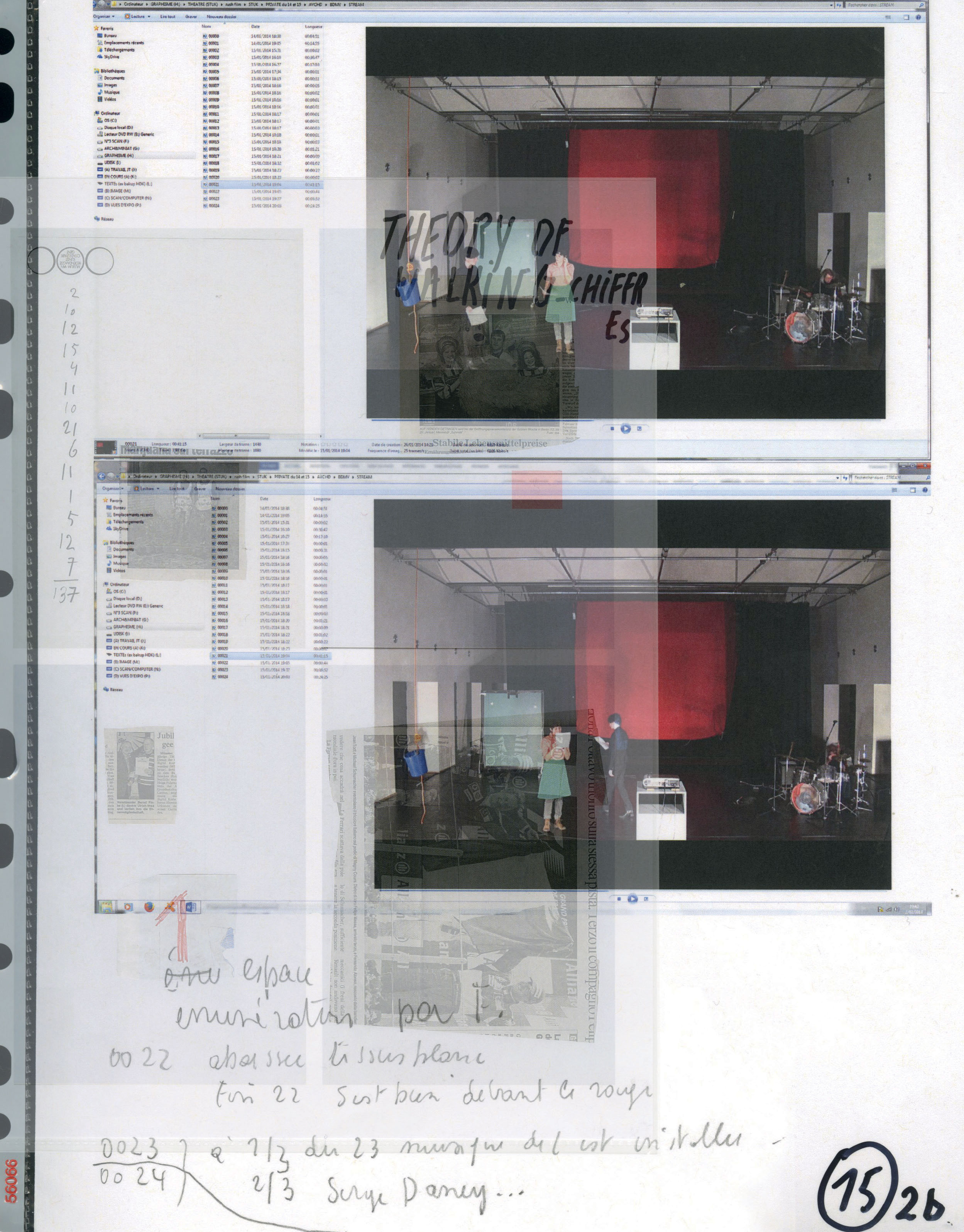 This proposition for Etcetera is based on Joëlle Tuerlinckx’ ‘lecture opera’ “THAT’S IT! (+ 3 FREE MINUTES)”, which Kaaitheater recently presented in the frame of Performatik, the Brussels biennial of performance art. The work on the following pages is an assemblage of flip cards and paper scraps, original archive material and rehearsal notes. Joëlle Tuerlinckx / page 39 and 40 Christoph Fink / page 41 – Valentijn Goethals / page 42.

On the lecture opera THAT’S IT! (+ 3 FREE MINUTES)

THAT’S IT! (+3 Free minutes) can be seen and understood as an exploration; primarily as a curious, critical and amused exploration of a recently discovered medium ‘a parcel of air that I have yet to unpack,’ said Joëlle Tuerlinckx about the exhibition at the time of her first solo ’Pas d’histoire Pas d’histoire (No Story No History)’ in 1994 (Witte de With – Rotterdam). Known since then for her oeuvres-exhibition, Tuerlinckx now considers the stage as the site for action, a move that is as unprecedented and unusual for herself as it is for her audience. By action’ we understand gestures of humanity, of work, of survival, of pleasure…’ It is in these terms that she defines the medium itself of the exhibition. By actor,’ ‘a person or character who has at some point been asked to do something.’ By this ’something’, ‘the action, as minimal or banal as it may be: to walk, to descend a staircase, to put this rope on that table,…’

With the presentation THATS IT! (+3 Free minutes), Joëlle Tuerlinckx plunges fully into the theatre medium for the first time and the spectacle will be total! Bear in mind that everything in the work was leading to that: the materials of this total theatre, which has been announced as ‘a lecture on a work,’ will be those of her gigantic archive. Those images already put in practice the dramatisation of the economic and political world, as it emerges from those pixelised patterns found in news archive images. The world of art and business display their cohabitation. Amongst them, the category of monstrations (the act of showing) is exemplary in itself: Pointed monstration, Group monstration and Number monstration.

It is in this sense that we can talk about a true theatre-laboratory, we can evoke the curiosity of its author. THAT’S IT! displaces the world, the worlds of art and its customs, its actors, its locations. It takes it literally off site and on stage. In the style of a chemist, of a chapter act, with THAT’S IT! Tuerlinckx will provoke, and observe the ensuing responses.

(A) Reality in THAT’S IT! will consequently be that of the stage exacerbated in its theatrical illusion. A scene which, for the benefit of the oeuvre and its basic tenets, leaves space for the imaginary. ‘That’s it,’ the stage tells us. Yes ‘it’s that’ thinks the viewer. In this new context of dramatisation, Tuerlinckx transforms her visual work and the world of fine art into a spectacle that has assimilated theatrical formats as an active part of its work process. For instance, by using the method of the monstration, the artist invites the audience into the heart of the thought-process. Her computer desk, on display in the room, is the central instrument for this task. Files are opened, examined, browsed and closed again. Tuerlinckx guides the spectator into a labyrinthine journey through her image archive. She communicates to the audience these structures of rhizomatic thoughts, her discoveries, observations and temporisations.

In this true theatrical laboratory, live and pre-recorded, where the present of the action (the present perfect-ly) of theatrical reality is confronted with the already there of a number of exposed cultures and histories’. In THAT’S IT! everything intertwines, assembles itself into inextricable sonic and visual epics where scenes from the most extreme genres constantly operate their fusion: folk bands march hand in hand with conceptual and minimal art. And in one gesture, in one appearance, of three notes here on a circle, a line, a hand-drawn square, the universe of the circus is suddenly ushered in. Circles, points, forms, figures, the ‘theatre of geometry’ -to quote the title of an older series of premonitory watercolours-, in their continuous renewal, they unfurl their various hypotheses for narration.

THAT’S IT! (+3 Free minutes) is, in other words, the theatre of geometry, the theatre of Joëlle Tuerlinckx’s archive. The circus of the oeuvre in the actuality of its own receptivity.